Into The Meat Grinder

A portion of TLG's plot description decided to mangle between Smashwords and distributing to the likes of Apple and B & N.

Sipe’s reality: betrayed, wounded, looking down the barrel of a little blackmail courtesy of the teenager that just discovered him unconscious in the tiniest of tiny Oregon towns.
Tiffany’s deal: Sipe helps her locate a missing friend or the faked boob-grab pics make the rounds. The local less than honorable law enforcement...her slightly crazy uncle...

instead of having a SPACE or GAP between sentences.

Most of the 7 billions residents of planet earth seem unperturbed, still, I sent a heartfelt message to the Smashwords problem solvers since my feeble workarounds haven't done a lick.

Lucid is formatted.  Ready to go into the waiting teeth of the Smashwords meat grinder.

They say contests are a method to whip potential book readers into a frenzy.  So this is a contest (also, it's like calling out into a dark room, or, wondering at any other presence in the chill, wind-whipped abyss...).
The photo below is of a famous NYT bestselling author.  If you can name the author, comment below or email (email link existing in the profile link on your right (assuming your phone/pad/what-have-you displays that column)), and we can discuss terms. 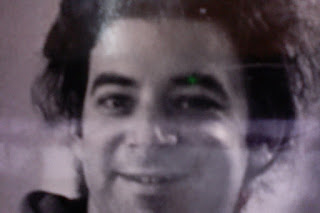 The Lipless Gods.  Free.
Posted by Brian Stillman at 12:26 PM No comments:


The most exhausting writing session is never writing, not even re-writing, but performing the grammar and punctuation and plot and dialogue check.
Resuscitating Lucid for the purposes of self-publishing presents the "opportunity" to go over that manuscript yet again.  It does bear fruit.  Not mammoth alterations, but little 'stop the reader in her tracks' things that made it passed spellcheck get nabbed and altered.  Catching that I referred to a character's need for 'mediation' when I meant 'meditation' only proves that the complete suck of a time-investment can pay off.
Lucid is really long.  It isn't, but it is.  After alternating between slogging and sprinting through some 50 chapters in a day and a half the PW reviewer's take (...this very long teen thriller...) seems dead accurate.
I'm also chagrinned because after ballyhooing the 102,000 word version, turns out the 94,000 word edit not only proves leaner and meaner, but better overall.
What also seems cool and weird at the same time is to have a pre-publication listing on an actual verifiable big-timey retailer website for a book.
Neat (because it's my book).  Intimidating (because I have a (self-imposed) deadline).  Depressing (because I am bacterium in an ocean choking on same as well as hosting all that actual majestic and established ocean life). 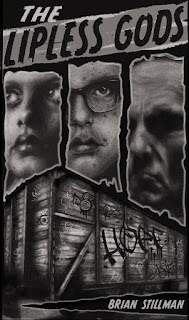 Posted by Brian Stillman at 3:48 PM No comments:

I've finished 4 novels - if you count Lucid twice.
The first time I finished it, the YA thriller starred a teen male protagonist.
Three years later, I rebooted it, kept most the beast nose to tail while still rewriting roughly 98%, but with a much smarter and more intrepid female teen protagonist.
When submitted to the then-in-existence Amazon Breakthrough Novel Award, the book scurried forth so far in the process as to receive an actual read by an actual Publishers Weekly reviewer.
Their take, in brief:

"There’s a distinct identity crisis with this very long teen thriller...it’s a convoluted tangle of conspiracies, murders, and mayhem, featuring no less than three climaxes and resolutions as one plan feeds into the next. What could be a nuanced exploration of Hollywood faith systems, a culture clash between small town and worldwide fame, or a grim exploration of obsession and betrayal, ends up being none of the above. The writing itself is solid, and the characters, including the intrepid Lucy, her ex-boyfriend Sherman, and down-to-Earth megastar Jack Ford, are engaging, and there’s certainly a lot to enjoy. But this is one story that needs to tighten its plot and figure out just what it wants to do."

The last agent that considered Lucid frowned at the beast's 102,000 word count and requested 15,000 to vanish.  At best I axed 8000.  To no surprise the agent passed altogether.
My plan is to epublish Lucid same as The Lipless Gods.  Mostly, just because I want to see what cover masterpiece the disturbingly gifted Jenny Dayton creates.  By the time it releases in May the plot won't be tightened much.  If anything, I'll probably add words to the original 102,000 word count just to flip a metaphoric finger at a reviewer and agent doing nothing more than their jobs.
Lucid's story is simply this:

When she was 11, Lucy McCall’s life changed forever.  Her mother died, and her older sister Maddy fled their tiny hometown in pursuit of Hollywood stardom.
Five years later, Lucy’s life is about to change again.
Dream turned reality, Maddy’s returning to rural Eaton, Washington to premiere her newest romantic comedy, the aptly titled Small Town Girl.
Not only is Maddy a movie star, she married the biggest movie star in the world – action hero Jack Ford.  The Hollywood power couple claims membership in the Church of Lucentology – a controversial religion as well known for a roster of big names as for the whispers of human rubble left in its wake.
Lucy’s father, Senate, is no fan of Lucentology, or the stranger he believes Maddy has become under the poisonous influence of the Church, and its unsettling leader, Horace Walton.  Senate hasn’t forgotten the promise he made his late wife: he’d always protect their girls, no matter what it took.
An intimidating personal security detail accompanies the Hollywood visitors, helping mitigate the crush of press and enamored public descended not only upon the tiny farming community, but camping literally across the street from the McCall’s front door.  All of this is more than enough to throw Lucy’s life into turmoil, but then the unthinkable occurs during the post-premiere party.  Explosions rock the posh country club and in all the mayhem…a kidnapping occurs.
While the Hollywood visitors begin an intensive, secretive, and increasingly frantic search for one of their own, Lucy begins piecing together what happened in the days leading up to the attack, and soon realizes she might be her sister’s best and only hope of being saved.
Lucid is a 102,000-word YA mystery resonating with themes of loss, betrayal, and self-discovery.

Posted by Brian Stillman at 8:16 AM No comments: