The bloody handprint.
That's Naomi's handwriting on the first round of hyperbole, shaping up, sculpting the hyperbole.
Achingly, in this electronic age, the world where City of Seattle job descriptions are chockfull of spelling and grammatical apocalypses, is her note "add a space" between the recommendation closing paragraph and the 'Sincerely'.  Presentation upon physical letterhead of paramount importance in those halcyon days, pre-WWW, where interns on runs relied on Thomas Guides, the spiral bound book itself or Xerox-ed copies of routes.
The date on the letter is damning.


Ixtlan closed up late summer of '96.  I stayed on, unpaid, Salacious Crumb-like, until February of '97, opening mail, drinking Yoo Hoo and snarfing free food as it became available. 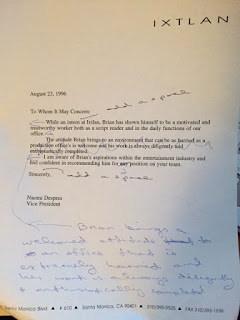 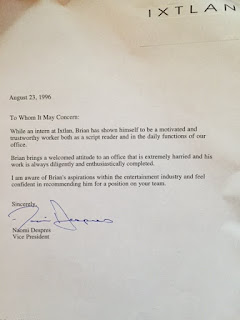 Posted by Brian Stillman at 6:02 AM No comments:

Somewhere in a box in this room there ought to be a gray-hued sheet, in Ixtlan letterhead, trumpeting my employability in the entertainment field.
It's signed by Oliver Stone.
In reality, it's written by me and signed by Annie Tien, Oliver's chief assistant, dated summer 1996.  My guess is most letters and photographs embarking out of the Stone office those days were forged one way or another.  Circumstance.  Oliver was a busy guy.  The weed.  Regularly scheduled home visits from hot ass production assistants.  Et cetera.
Months ago I found the letter of reference supposedly written by Naomi Despres, Ixtlan's chief creative executive (*), but I don't remember if she penned any of the fibs or just looked it over beforehand. She had her own version of an Annie, but not one so disposable as to potentially sully Naomi's good name.  Found, the letter stealthily submerged back into some dark recess of the office, or 'the swamp' as I've come to think it.
So.  Can't find documentary proof of the internship, but rummaging did pay off in rejection letters for Dead Milkmen, the novel I wrote (some of) right out of college.
I don't remember a damned thing about it.  If so inclined, courtesy of a first class stamped envelope I've held onto for 20 odd years, I've got about 3 chapters to poke through.  The query letter promised publishers:

The consumption of art and art consuming, the culturally abandoned swinging and striking out, ecotherapy, the death of the Postal Service, and exploding dairy workers.
Dead Milkmen.  One-part William Gibson, one-part Andy Kaufman, most-part all points in between.

Strangely, The Berkley Publishing Group and Alfred A. Knopf passed.  Somewhere there's got to be a resounding 'no' form letter from Bantam, too.  If you're a 22 year old asshole ripping off (and name dropping) William Gibson then by god of course you try to get on with his (then) publisher.

Jenny continues to work on the cover art for The Lipless Gods.  That's some of it down there.  So, so good it fills me with certain dread that any poor schlub snookered into reading it will set it aside once overwhelmed by that lipstick on a pig analogy... 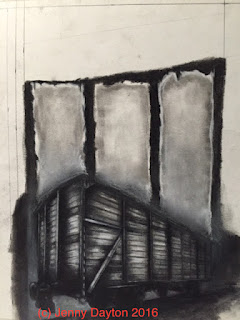 * Digging around finally unearthed the letter. Naomi was Ixtlan's Vice President, not just a 'creative executive'. Concurrent to Ixtlan was Illusion, another of Oliver's cash cows.  The offices were fully amuck with Illusion creative executives -- maybe not Minions-like amuck but a field far more amuck than Ixtlan.

Posted by Brian Stillman at 1:52 PM No comments:

Living in Los Angeles, I wrote two screenplays.  Marvin, a comedy involving an egotistical boy band lead singer not only killed and gone to Heaven, but wackily embroiled in a battle between angels good and bad.  A masterpiece I saw fit to register with the Writer's Guild of America.

The Devil's Camera was a Sam Raimi-influenced definition of treacle.  I envisioned then-It girl Janeane Garofalo playing the lead.  Such an envisioning reveals me not only old, but certifiably older than shit.

One of my fellow Ixtlan interns purported himself the son of sci-fi legend Theodore Sturgeon.  At a Universal Citywalk hosted release party for the VHS (!) of Natural Born Killers, Andros' writing partner informed me she and Andros not only whipped out entire screenplays over the course of a weekend, but "they're good, too".

Every fool believes their way with words is new, good, original, maybe even a game-changer.  Laying it on thick like that is quite possibly the most necessary portion of writing.  Especially in the vacuum.

At Ixtlan, I wrote dozens of script and book synopses, the majority bearing soul crushing coverage reports.  Ever hear of Twin Peaks co-creator Mark Frost's serial killer novel?  I read the manuscript in a single sunny Santa Monica afternoon and gave it one of dozens of momentum-stopping thumbs down.  I even dropped a deuce on Gus Van Sant's maiden Harvey Milk-effort.

For the longest time, post-Los Angeles, post-movie industry dreams shuttered, I refused to watch movies.  Even today, mention of Ixtlan head honcho Oliver Stone unloosens something just beneath the surface.  A vague yet potent dissonance suitable to some loser scraping by in a Philip K. Dick tale.

Strangely, for both Lucid and The Lipless Gods part of the prenatal writing process involved assembling a "trailer", rolling the most visual or violent scenes through the noggin', testing them out before setting them down in words.  For fucks sake, even a Warner Bros. movie logo precedes the imagining.

Currently, I keep waiting for a trailer to run.  Got characters.  The vaguest wisps of conflict.  I just need an ignition point to perk up and plant my butt so I can whip it out, easy as Andros and his partner could. 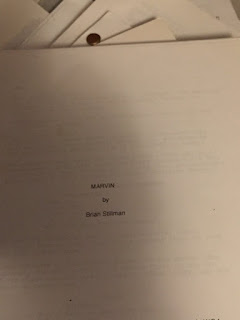 Posted by Brian Stillman at 5:50 AM No comments:

The Lipless Gods is the third novel I've written, or, finished; I'd be more apt to anoint it in those terms.

I like to think of writing in terms of finished or not-finished. If you added up all the unfinished projects, then I'd be somewhere around 10 or so novels.  And if you counted the 2 versions of Lucid, I've finished 4 novels (the less said of novel number one, The Colonists, the better).

TLG is a crime novel.  A rural setting.  A big city mob gunman beaten and abandoned and blackmailed into helping a kid desperately seeking a vanished classmate.

Lucid went out to 100+ agents; no one bit.  TLG went out to roundabout 90.  3 agents gave it the sniff test.  1 agent is still sniffing.  In the interim, I'm all geared up to go the Smashwords route.

Cover sketch below courtesy of the amazing Jenny Dayton.  If only the book itself were half as good... 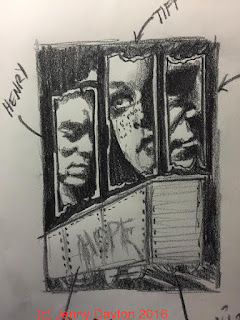 Posted by Brian Stillman at 9:02 AM 2 comments: