A Contraction And An Exclamation Mark

One of my first acts as a wage earning Los Angeleno was to steal Lauren Hutton's credit card.  It wasn't my first interaction with celebrity.  That honor belongs to narrowly avoiding collision with Richard Dreyfuss exiting Ixtlan's restroom like a shot.

I think Ms. Hutton bought some magazines.  Any celebrity buying something at Brentano's was buying magazines -- or that might just be a false conclusion sourcing from watching Jason Alexander peruse the magazines while wearing sunglasses, one of those "Please notice me trying not to be noticed" moves teenagers perfect and later shed.

The Brentano's bookstore manager was pregnant the entire five month stretch I knew her.  I won't blame her constant state of crisis on the unborn.  Based on collected evidence, Kristen could be catalogued high-maintenance before / during / after said pregnancy.

When she pulled me aside about the Lauren Hutton fiasco her bearing was that of an overburdened hotel manager admonishing a dimwitted immigrant bellboy guilty of insulting a head of state (i.e., she was Basil, I was Manuel).  Celebrity removes certain members of the population from the equation of responsibility because of people like Kristen.  She'd read her F. Scott Fitzgerald and taken it to heart.

A recent John Carpenter-kick has included Someone's Watching Me!, a 1978 made-for-TV movie starring...Lauren Hutton.  It's Carpenter right on the cusp of being JOHN CARPENTER, and all told, more of a historical artifact than sterling piece of entertainment.

Every scene, someone is smoking.  Every shirt with buttons - male or female - is unbuttoned down to the navel.  Cars are all Oldsmobile-sized, even the foreign imports.  The pivot point is Ms. Hutton being driven to sanity's edge by a stalker, the beast's chief moves watching her via telescope and calling her over and over again.  It's well nigh impossible to sympathize with a character who could just draw the shades and leave the phone off the hook and starve her enemy out.

Phones stick out like a sore thumb.  Clunky push button boxes with curlicue cords.  Every time Hutton approaches the ringing phone to stoke the villain's fire, it looks like a goobery theater set piece, like an adult about to interact with a child's toy. The pre-climax to the climax involves Hutton and gal pal Adrienne Barbeau seemingly outwitting the stalker and storming his castle courtesy of walkie talkies, the communication ease and mobility involved an involuntary nod to the common state of affairs only some 30 years hence.

I can't recall if Hutton ever came by to retrieve her credit card or if she or an assistant ever even contacted Brentano's in the wake of my bungle.  I wonder how that kind of celebrity-centric issue is mitigated in the 21rst Century.  Probably you could Tweet or Facebook or Instagram and the celebrity and/or their foot soldiers would respond.

Sadly, transplanting today on yesterday, I bet phone-obsession would only result in a similar outcome to my interaction with Ms. Hutton.  Pointing out to a manager the famous customer was enraptured with social media rather than taking responsibility for their piece of plastic still wouldn't bump me into the zone of immunity.

Last summer I killed - by hose and foot - 200+ wasps.  The body count is far worse once you figure in what the store bought wasp traps accumulated plus the wasps sucked up by the shop vacuum and the wasps colonizing the house, starved to death by the presence of said operational shop vacuum, its nozzle lodged in the gap between siding and wall.

Yesterday I killed fruit fly maggots performing their creepy wiggle on the inside of the food waste can. Apparently I've discovered my chosen method.  The hose dispatched the maggots.

I'm still working my way through a giant bottle of fish oil pills. As recent as two months ago I ate some salmon fried rice.  We feed the cats Nutro Adult Chunky Loaf Chicken Dinner.

Early on in 2016 I stopped consuming dairy and egg products. Cheese pizza and chocolate M & Ms were staples in the diet. Pushing the shopping cart down the frozen foods aisle, I always feel a pang when passing by the discs of delicious sodium death.

Beef was the first thing I ever cut out.  That was back in 2003 following reports of Mad Cow traces found in Washington livestock, a news story I stumbled on while -- no shit -- eating some Dick's hamburgers. Years on, and this does and does not mystify me, I salivate at the smell of lit charcoal and meat grilling away.

Yesterday, syrup-less, I put honey on pancakes I bought only after making sure the batter contained wheat and soy, no egg. Clever and convenient, pooh-poohing one critter product while applying another.

Issues I have with animals being used and consumed and tortured infiltrate my reading and writing. Every mention of Gabriel Allon's leather jacket makes me twitch, same as John Marshall Tanner or Lucas Davenport's dining decisions, or the social media shared eating exploits of James Lee Burke or any other author of note.  I wonder which characters of my own devising will struggle with vegan and vegetarian options and how to make it seamless and not petulant one whit within the fictional construct.

And all this credit and debit accounting while on average 300 sentient beings perish in factory farms every second (...that kind of sentence proving I need to double-down on the seamless, even within the non-fictional).
Posted by Brian Stillman at 7:40 AM No comments:

Call It A Comeback. Or Zumwalt. Or Something.

Currently I'm poking at 2016's fourth or fifth idea waiting to take flight and transform into a novel.

The one with the tentacled comic book artist failed to take flight. Ditto, the alien world lurking just below our world one. And RIP my third or fourth whack at a lurid crime story orbiting a failed comedian with the stage name 'Chuckles Lovakia' (but that one I'll come back to; the name is too stupid not to use).

Years ago I had a web comic.  Just like everyone else.  It was called Zumwalt.  I drafted dozens of daily comics that never saw full inking / scanning / posting.  The characters always stayed in my noggin', waiting for me to do something useful with the concept.

I know Zumwalt 2.0 will likely crash and burn, but it's still better than not being able to even think about writing which was how I spent all of 2014 (not to knock 2014; man, I read a lot). 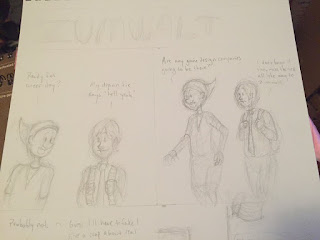 Posted by Brian Stillman at 5:57 PM No comments:

The books together have now been downloaded 301 times. Whoo hoo.  It seems like a lot to someone who hasn't had things available for download before.  Still haven't gotten reviews.  That - as always - concerns me.  Makes me think the situation remains Jenny's amazing art draws them in and then I put all that enthusiasm firmly on ice.

Heck, if you started one of the books and stopped or were so disappointed you erased it from the e-reader/phone/what-have-you, I'd like to know.

99.9% of literary agents - mostly due to time issues - just use the argument that liking and not liking books is a "subjective" matter without telling writers why the corpse is a corpse and why it stinks as bad as it stinks.  If I failed as a writer I want to know why and in as much detail as possible so I can do better.

Regardless of all that, both books will remain FREE for download until a point soon to be announced.
Posted by Brian Stillman at 4:50 PM No comments:

That Tentacle Boy thing sure didn't last very long.  Maybe I'll get back to it.  Lost track of how many times I've started writing before finishing a plot.  That particular road always ends the same place.

Now I'm furiously re-plotting a story I've tried to re-plot before. It involves a character with a stage name of 'Chuckles Lovakia'. Cleverness of that sort happily doesn't extend much more into the novel.

Between TLG and Lucid, almost at 300 downloads.  For a time, I was convinced I'd hit that number before Ichiro cleared 3000. He slowed down, and then downloads slowed way down.  Still waiting on SELF-e to take the books down from SPL and KCLS so I can start selling only through Kindle.

Not sure how long that experiment will last, but I just want to see what - if anything - it does.

The novels won't sell for more than $.99.  That's what they sell for on Amazon right now anyways, but without the added exposure come whole cloth with exclusivity.

So for now they're free.  After that, they'll still be cheap.
Posted by Brian Stillman at 11:46 AM No comments:

In lieu of any better title...Tentacle Boy!

Wattpad reminds me of LiveJournal.  Posting to LJ was fun.  I don't know that writing at all is fun anymore, but I somehow squeezed out 1000-words today.  Maybe I can do it tomorrow, too.

Tentacle Boy is about as good of a title as I've got right now. It'll change.  The story is roughly sketched out in the manner I've always found fun-to-do (i.e., someone gives you $5000 to make a low budget movie; you script and shoot and scrimp to fit the budget).

This is the third project I've poked at this year.  The other was a ghost story and the other was sci-fi. This one is sci-fi, too, but I don't know what the tone is yet.  I'm not Larry Niven.  I'm not smart enough to be Larry Niven. That much I can state as pure fact.
Meanwhile, get your TLG and Lucid for FREE while you can.


Posted by Brian Stillman at 4:30 PM No comments:

Backing Out Of The Deal

To prep for Kindle exclusivity, you get to cut cords.

I contacted the nice folks at SELF-e/Library Journal.  In two weeks time, the books should be all but vanished from the Seattle and King County library systems.

Smashwords-wise, I'll opt out of distribution channels and then "unpublish" on Smashwords itself.

And then place myself in one big monolithic hand and see what happens.  My guess?  Not a Hell of a lot, but I'm acclimated to that pace.


Posted by Brian Stillman at 8:24 AM No comments: